Today I received a fax with a 12 month lease and deposit for my rental in Seattle. After 2 months of being vacant and going through 30+ inquires and applications, the house is finally rented. All done from New York City.

Here, in Seattle, I bought a house and I’ve been renting it out for the past 6 years. I had two houses, but sold one as I downgraded to 4 boxes. But after learning about the housing market, and having refinanced to an interest-only loan that was just at the end of its 3 year pre-payment penalty, I realized that I would have to sell the first house. 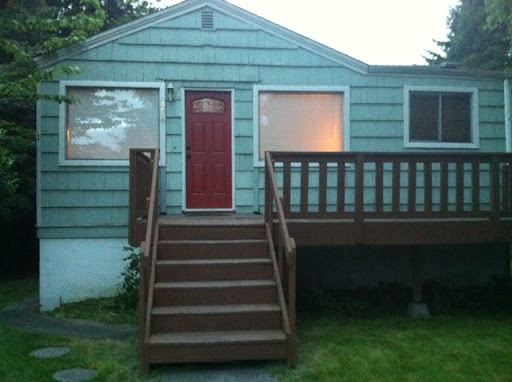 The second one, the one in the picture, I remodeled and turned into two full living spaces with separate entrances. I’ve discovered that you need to have coverage of at least 25% in order to break even from maintenance, vacancies, and so on.

Becoming a virtual landlord isn’t easy, but it’s doable—from anywhere in the world.

Before leaving Seattle for NYC, I filmed a video tour of the house and put it on YouTube. When prospective tenants would call, I’d send essentially the same template that would include:

I purposefully hid a key before I left. After qualifying the tenant and arranging a day/time to meet (and after I’d send the video so they were able to see if they liked it before either of us would waste any more time), I would then send them to the house and tell them I had a friend place the key and that they would be by, but not until after their set time.

Finally, after several potential tenants and one guy falling through (not once but twice), I got the signed lease faxed today to my Ring Central number. Done!

There were a few hurdles along the way, such as a friend going over to open the house and accidentally locking all doors which locked out the potential tenants when they arrived for their scheduled visit. Then there was the time my sister and her new husband crashing at the house and locking the key inside —I had to make key copies made and overnight to Seattle. But other than those snafus, it all worked out. I’m able to enjoy my time in NYC with the peace of mind of my house being rented. Totally worth it.